Founded in 1859, the High Point Police Department is dedicated to making High Point, North Carolina, safe for everyone who lives, works or visits the city.

When the police department decided to move to a new headquarters to expand and modernize its operating space, officers wanted to ensure the new building preserved the history and identity of their department as well.

Through a transformative expansion, the High Point Police Department now gives officers the spaces they need to protect and serve their community effectively, while paying homage to the department's rich and storied history.

The HPPD knew the upgraded station would require a crucial improvement:  the creation of a secure entrance for members of the public.

"If you want to get a taxicab permit or open a daycare, you have to be fingerprinted. At the old station, a civilian coming in to be fingerprinted could walk past someone who was just arrested," said Patrol Captain Matthew Truitt, who played a pivotal role in the transition. "For safety measures, we needed a separate area for the general public."

At the new station, members of the public are welcomed by an open lobby with two kiosks staffed by officers. The old building's entrance had chairs and tables that could easily be lifted, which posed a safety risk in the event of an escalating conflict. The new entrance is safely outfitted with Promenade seating built with perforated steel that is firmly anchored to the floor. Officers now use a separate entrance by way of a sally port that requires keycard access. 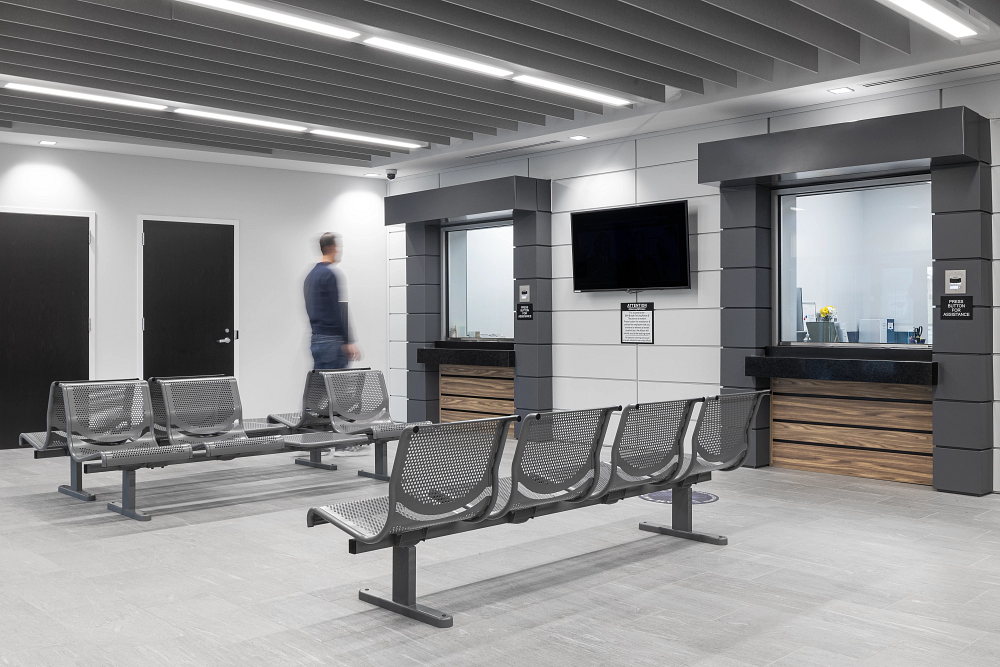 A Vision for Three Times as Much Space

Aside from a designated entrance for the public, the station offered a lot of potential for improving officers’ workspaces. HPPD had long struggled with the limited space at their old headquarters.

Originally constructed as a schoolhouse in 1963 and put into use by HPPD in 1985, the previous station was just one-third the size of the new building. "We'd have to cram five or six desks in an area that was designed for no more than three or four people," said Truitt. "It was very constricted."

Procuring new furniture was also rare. Typically, HPPD would acquire items that other city departments discarded at a central warehouse.

The new facility provided a fresh foundation with 76,000 square feet of space across four floors. The HPPD team divvied that up into more than 15 areas to accommodate a diverse variety of workstyles and functionalities within the police department.

On the fourth floor, 700 Series desks line various criminal divisions to provide the requisite space for officers to use their computers and organize their reports. Unite panels provide privacy for officers at their individual workstations as well as semi-private group spaces where four officers can meet regarding open cases. 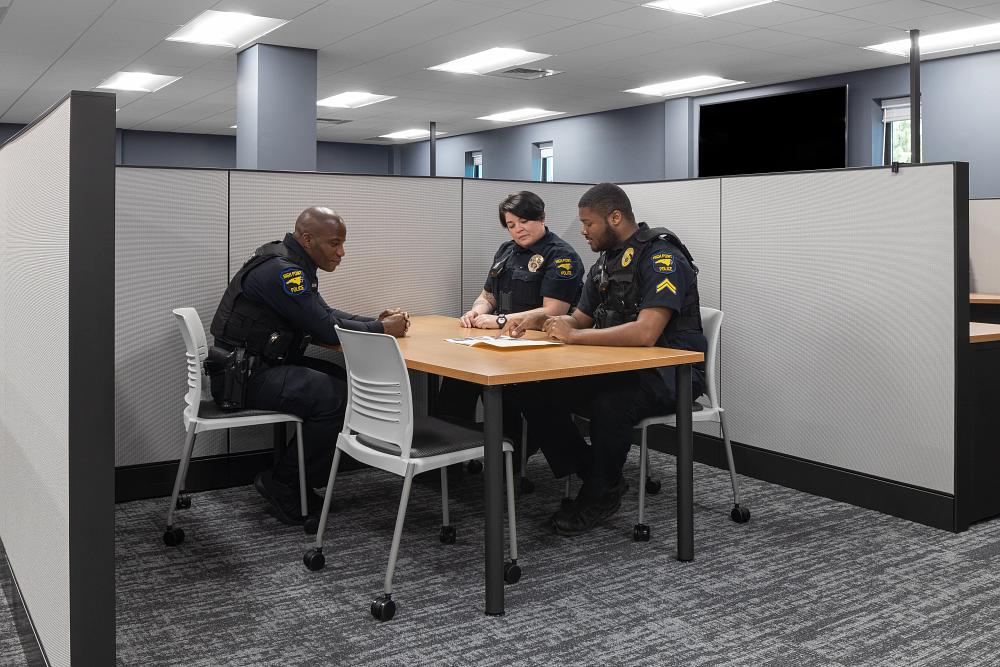 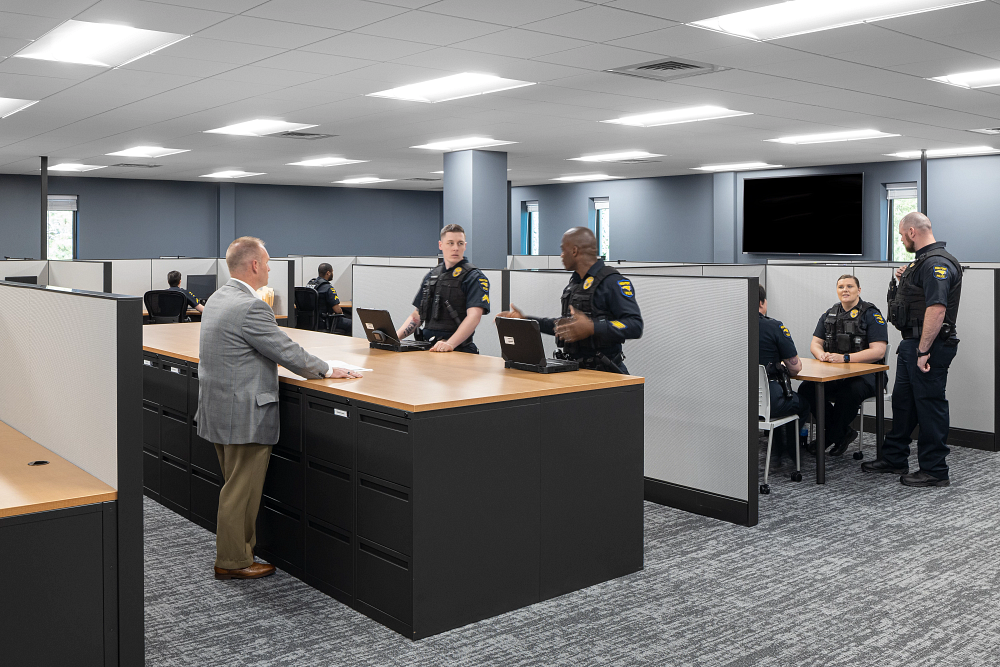 Just down the hall in the property crimes division, 700 Series storage units provide detectives with a standing-height collaborative workspace. The storage units are topped with a custom-length worksurface so that officers can type on their laptops and easily grab file folders without needing to walk back and forth between their desks and the storage area. 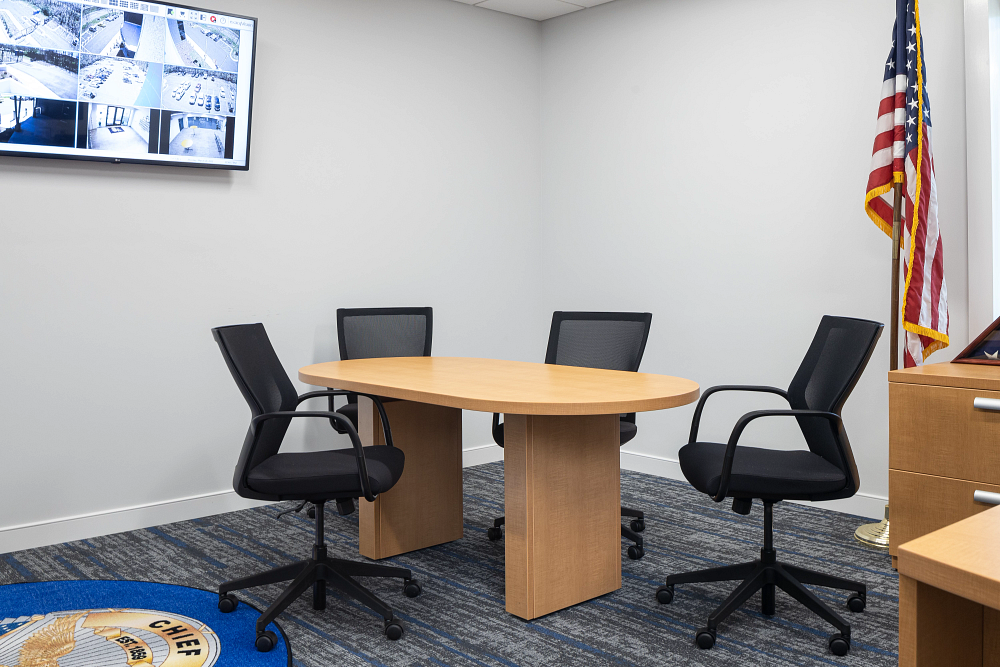 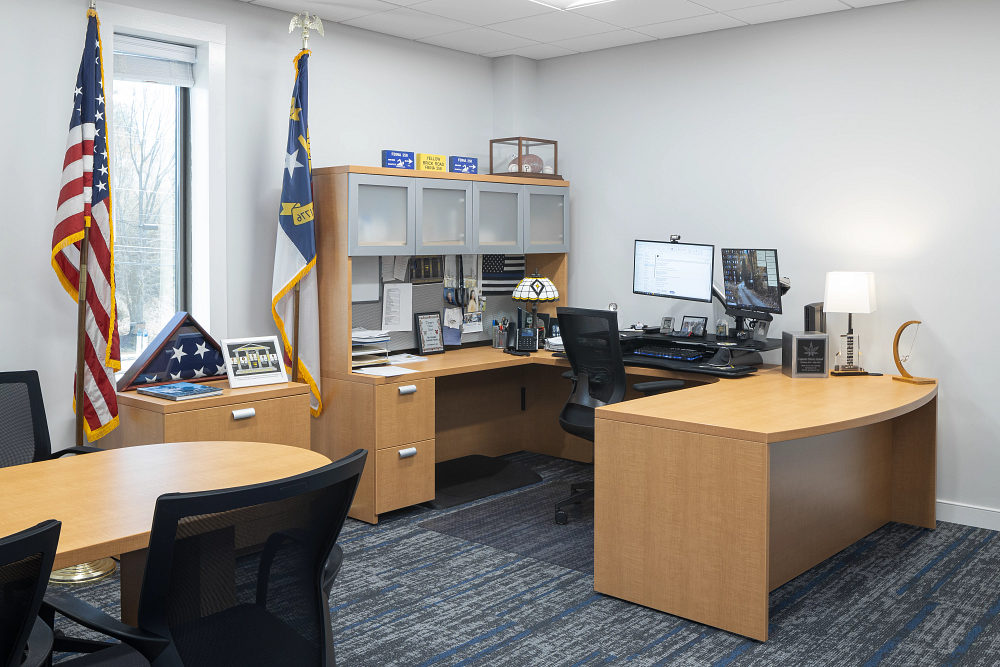 The department expanded the number of training and instructional areas, some of which now hold 70 officers. Largely on the third floor, these spaces are equipped with powered Pirouette tables and modified All-Terrain mobile lecterns, which create easy-to-move and power-supported teaching stations. In training rooms, Strive stack chairs with casters offer easy mobility. In assembly rooms, Strive chairs with soft, upholstered seats and stylish sled bases are ganged together to create stationary rows of seats. 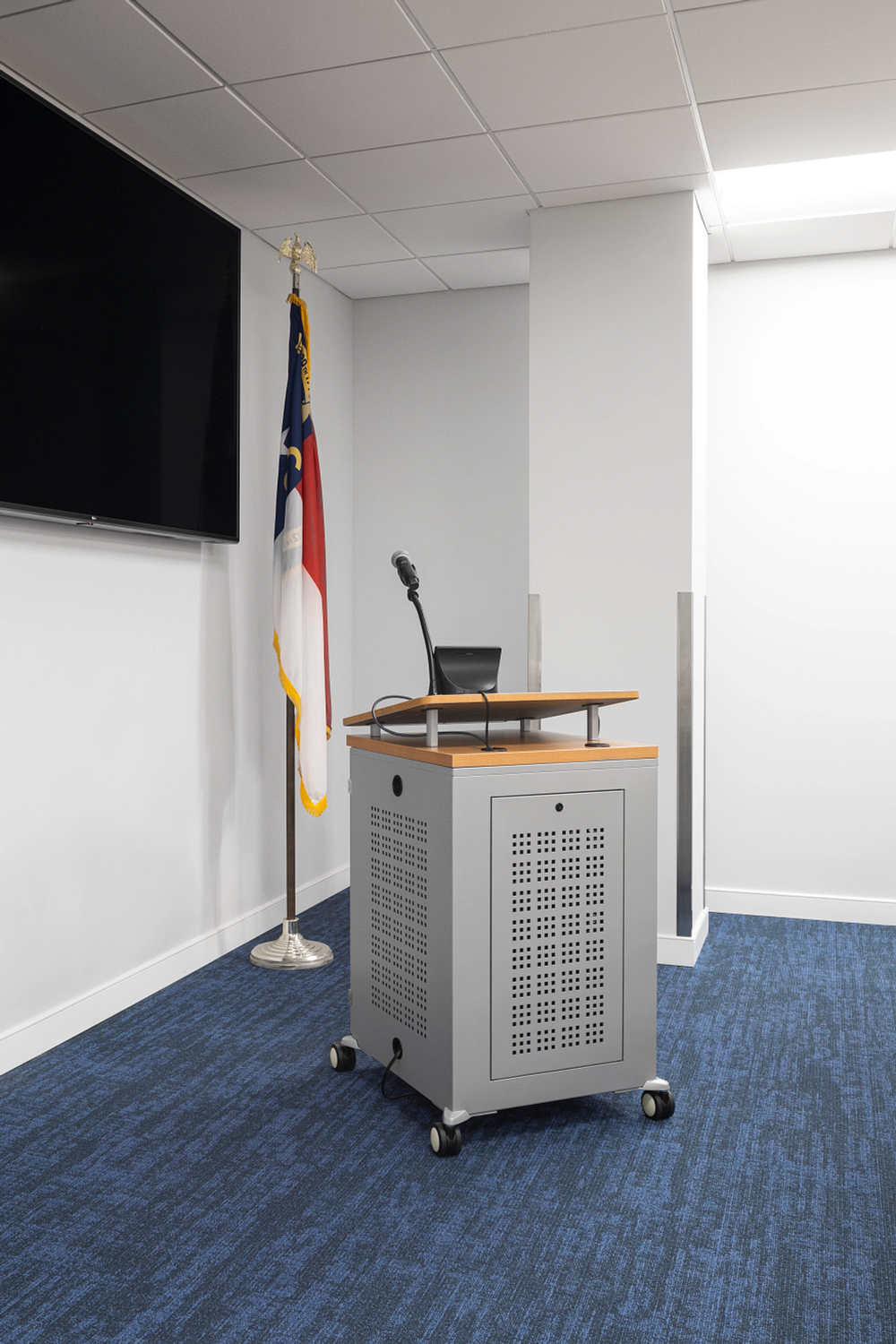 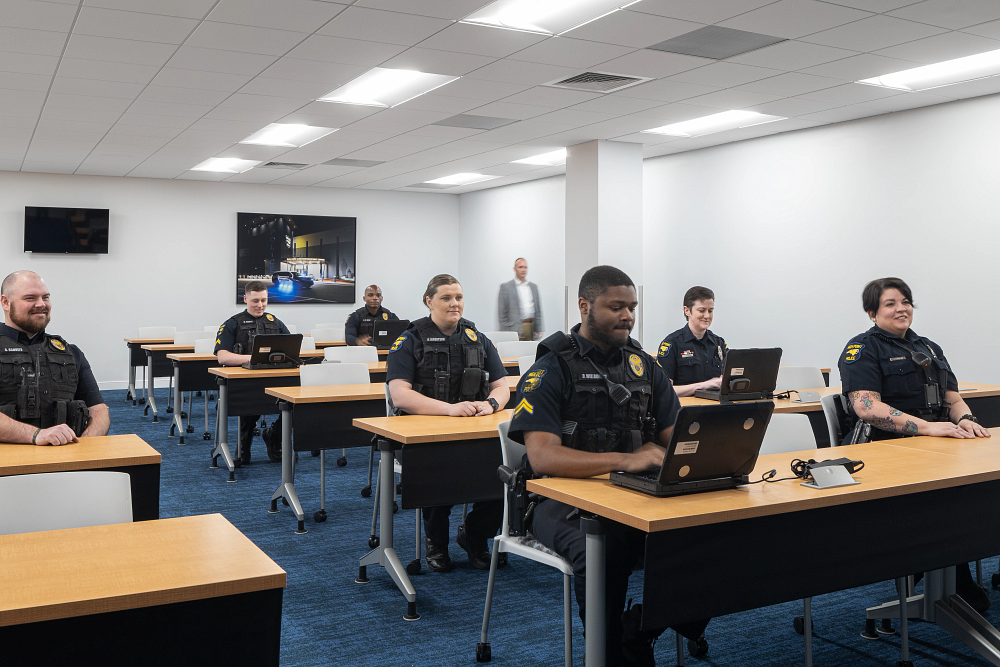 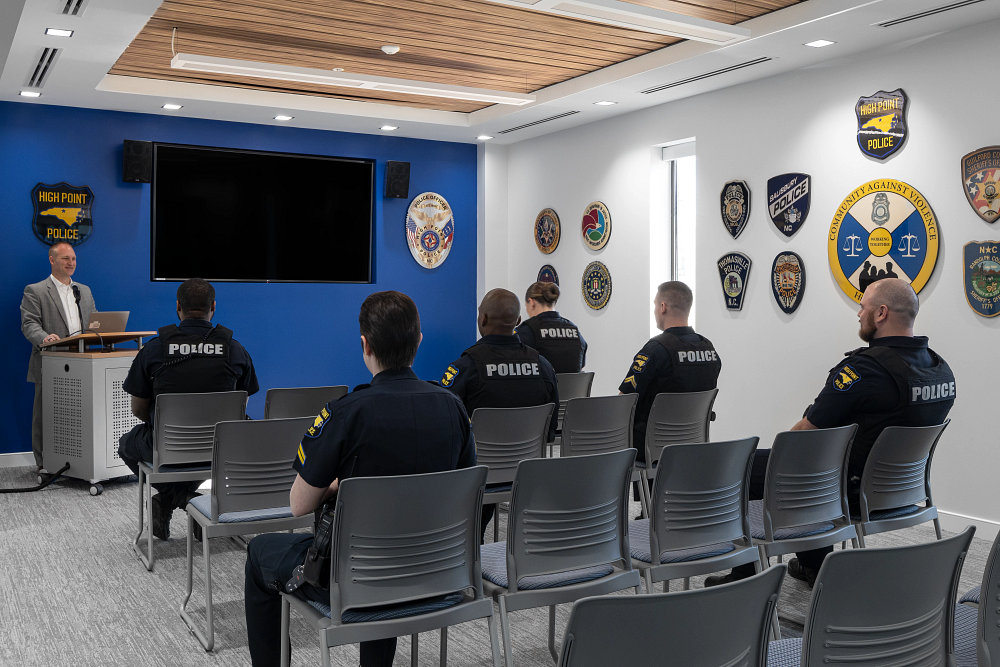 Everything is very functional, very open and very inviting. The workspace area flows really well, and that's all because of KI.

The entire facility is built with technology in mind. "At the old department, there were only five or six different locations where you could plug in your laptop," said Truitt. Now, power outlets via PowerUp modules are incorporated in worksurfaces throughout the station, from individual desks to training room tables and more.

The spaciousness and variety of work areas provided a fresh start compared to the previously crowded station. "There is a complete difference from where we were before and where we are now," said Truitt. "Everything is very functional, very open and very inviting. The workspace area flows really well, and that's all because of KI."

After years of working with a space that had nearly reached its breaking point, the HPPD wanted to prioritize functionality and comfort for their officers, especially their patrol squad.

"We wanted something very specific to our patrol officers, because they're really the backbone of the police department," Truitt elaborated.

On the first floor of the new facility, up to 35 patrol officers can gather before a shift in their designated assembly room, complete with powered tables for their laptops and flat-screen TVs. At the previous station, patrol officers had to cram into a small room meant for 15 people, which was often simultaneously occupied by other officers processing evidence.

"At our old location, officers' guns and radios would rip the foam off the armrests of their task chairs when they sat down. That's because the arms were fixed in place. They could raise up and down, but not expand outward," Truitt said. 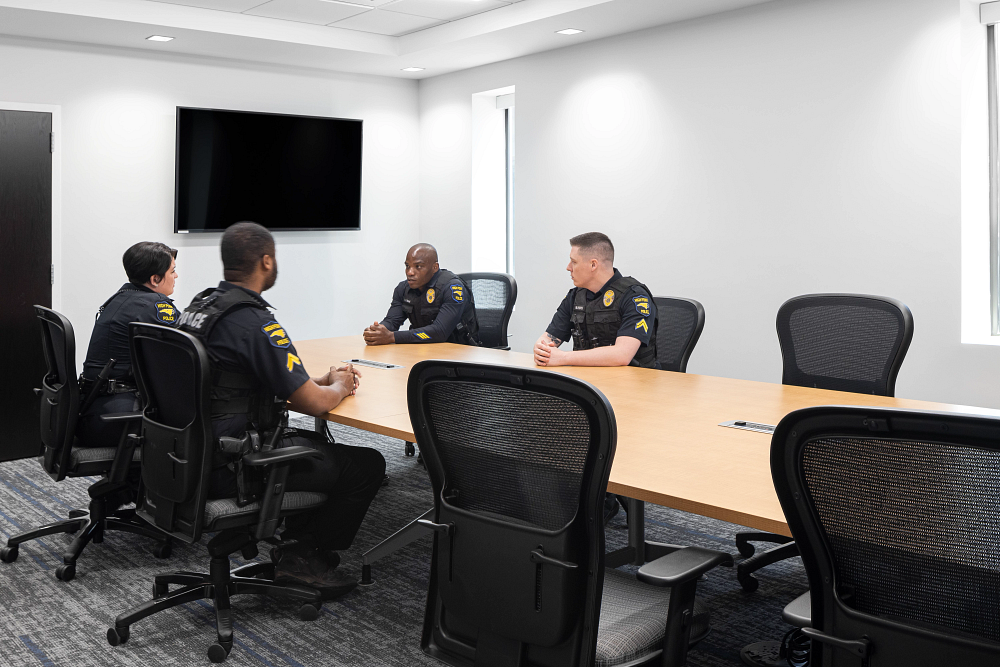 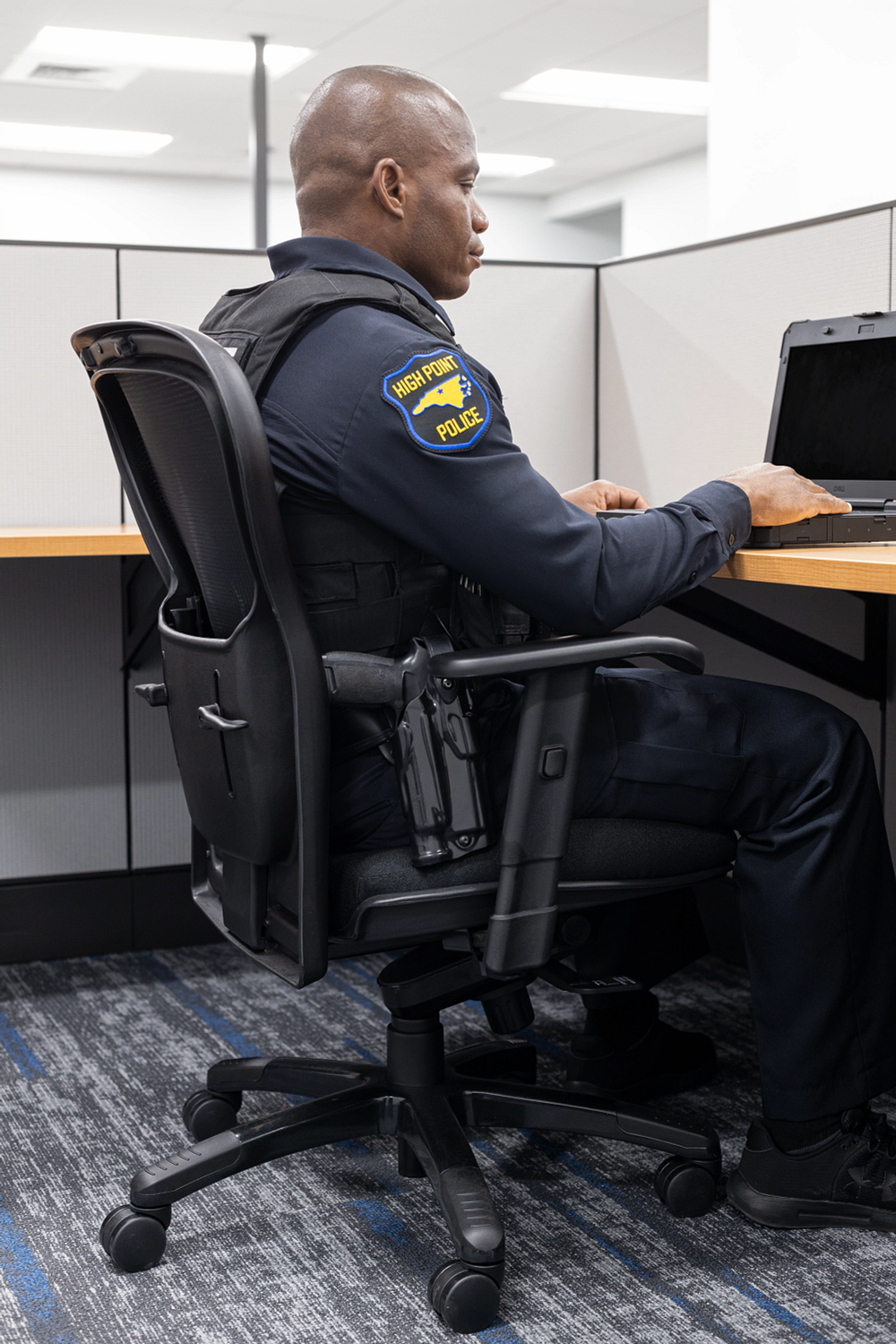 Through the Infinity from KI process, the HPPD officers met with engineers at KI's High Point manufacturing facility and developed a custom solution. First, the department tested out different task chairs. With function and comfort in mind, the KI design team provided a tailored product with robust lumbar support and outset armrests to accommodate officers wearing duty belts.

The HPPD team also wanted to create respite spaces where officers could decompress after a tough shift. Every floor of the new headquarters includes a lounge or break room with comfortable Affina and Soltice Metal sofas and lounge chairs, providing spaces for officers to relax, have a cup of coffee, catch the latest sports game or chat with their colleagues. 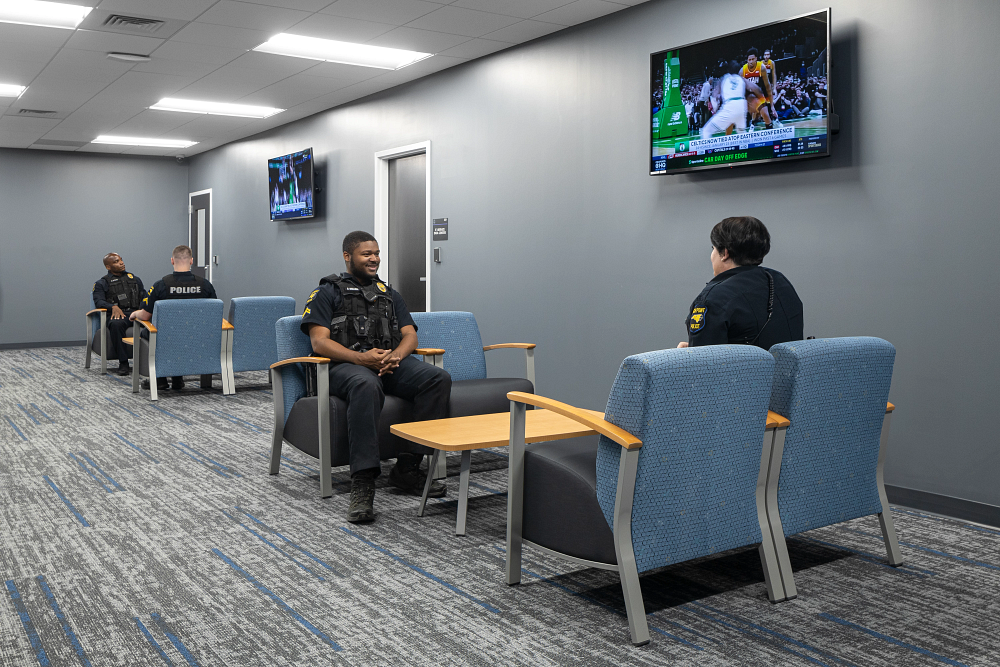 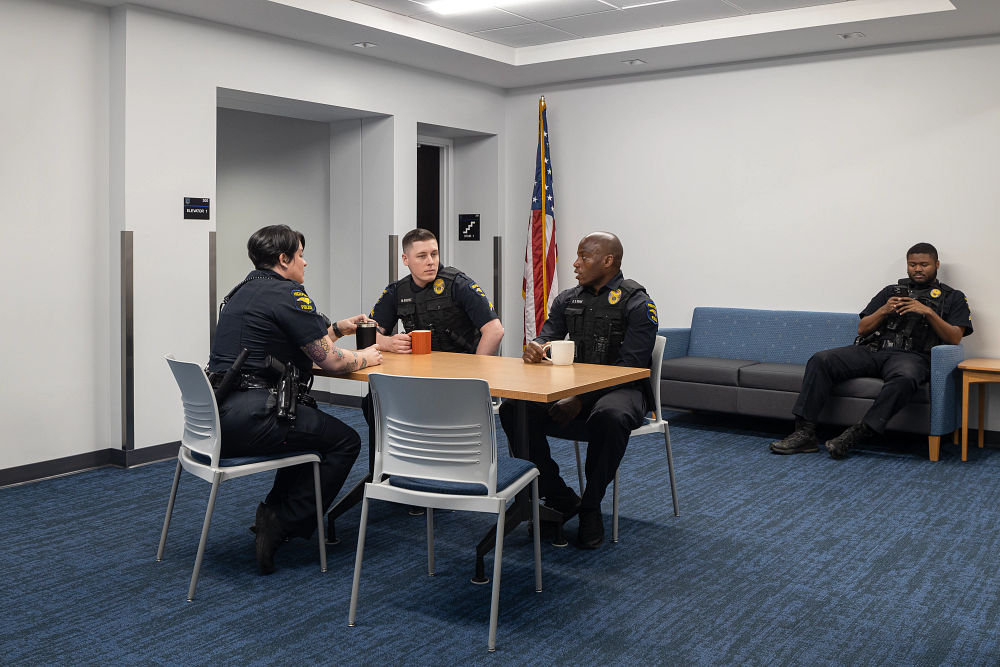 It's like a breath of fresh air. The space can change our mindset. It helps us embrace the idea that we don't have to have hand-me-downs like we did for so many years.

"Our identity is intertwined through every portion of this building," said Truitt. "It binds us through brotherhood and sisterhood in this noble profession that we have chosen."

On the third floor, a history room displays memorabilia from over the years, including photo collages, vintage uniforms, dedications to fallen officers, and the lamp posts and bell from the original headquarters.

For High Point police officers, the history room is just the cherry on top. "The entire station is something that we're very proud of," Truitt shared. "It speaks highly of the city of High Point and the police department. And it speaks to the wonderful relationship that we've built with KI."

With its new headquarters, the High Point Police Department is readily equipped to fulfill its mission of serving the community, while giving its officers room to grow. 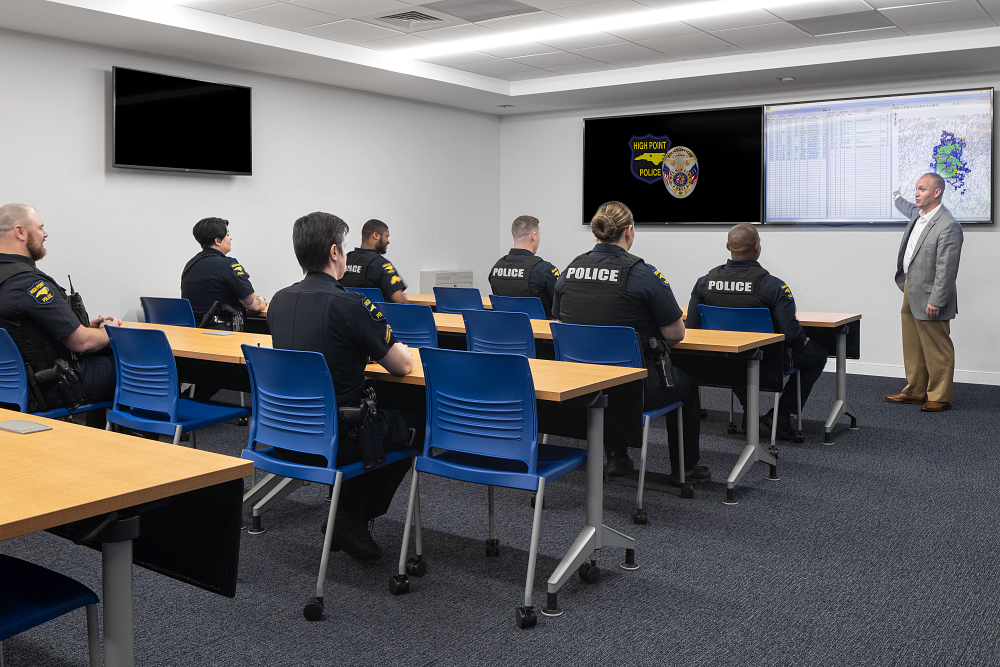 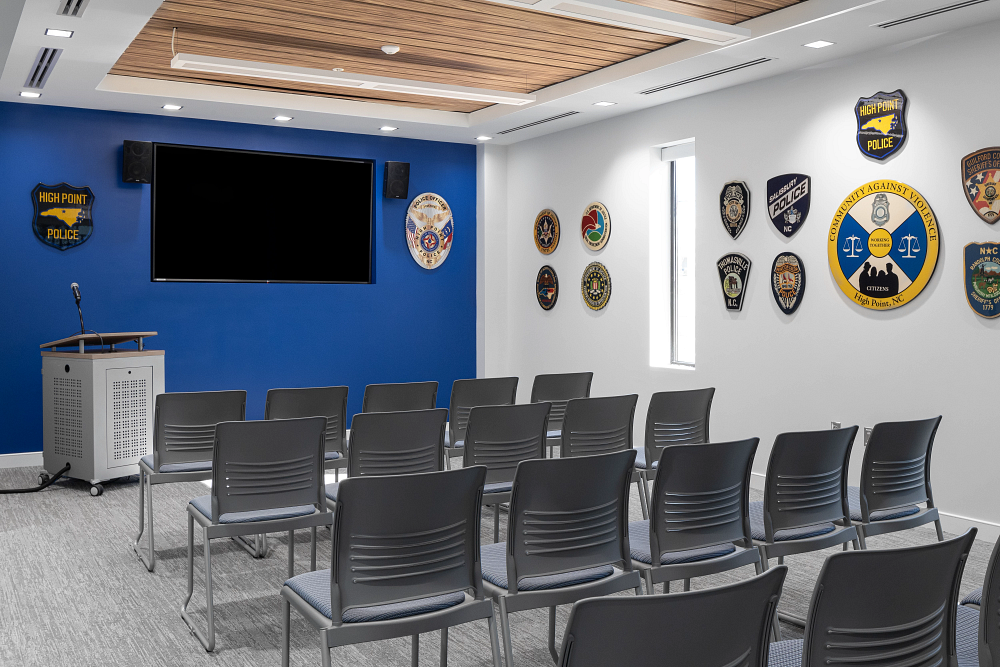 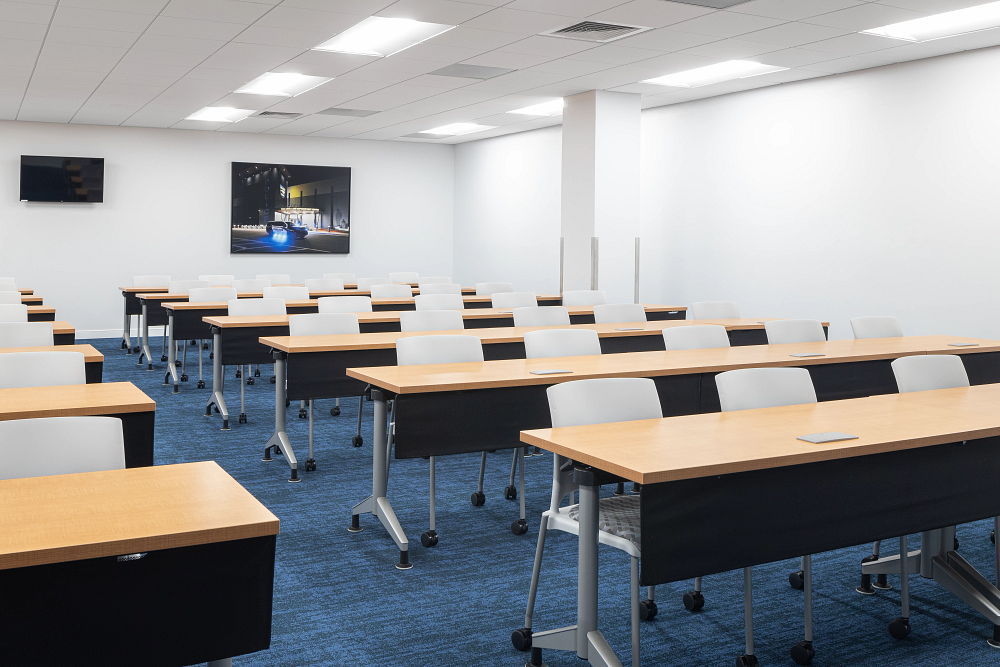 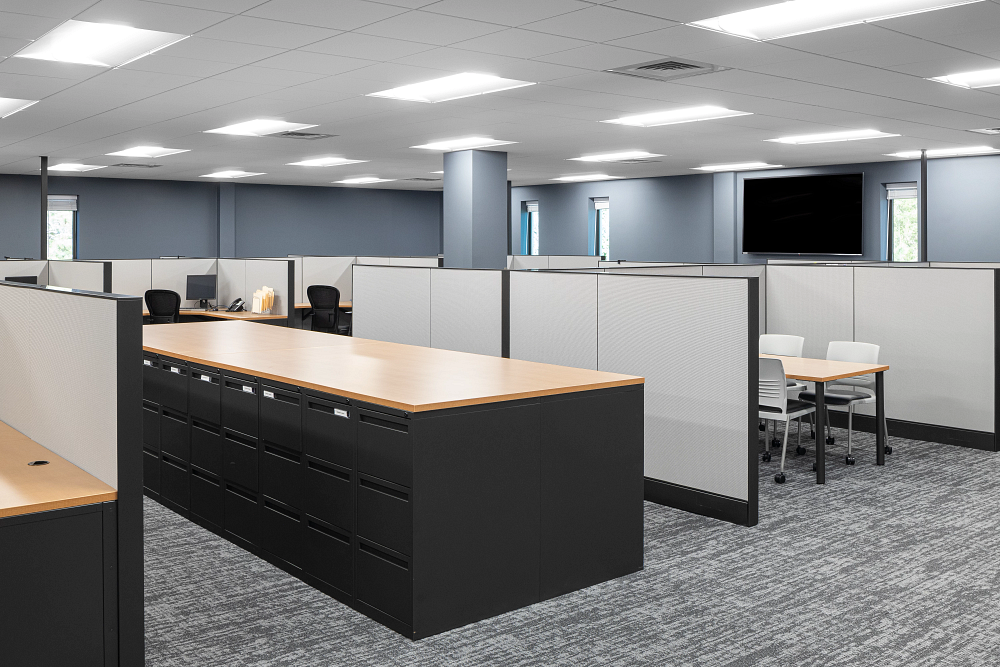 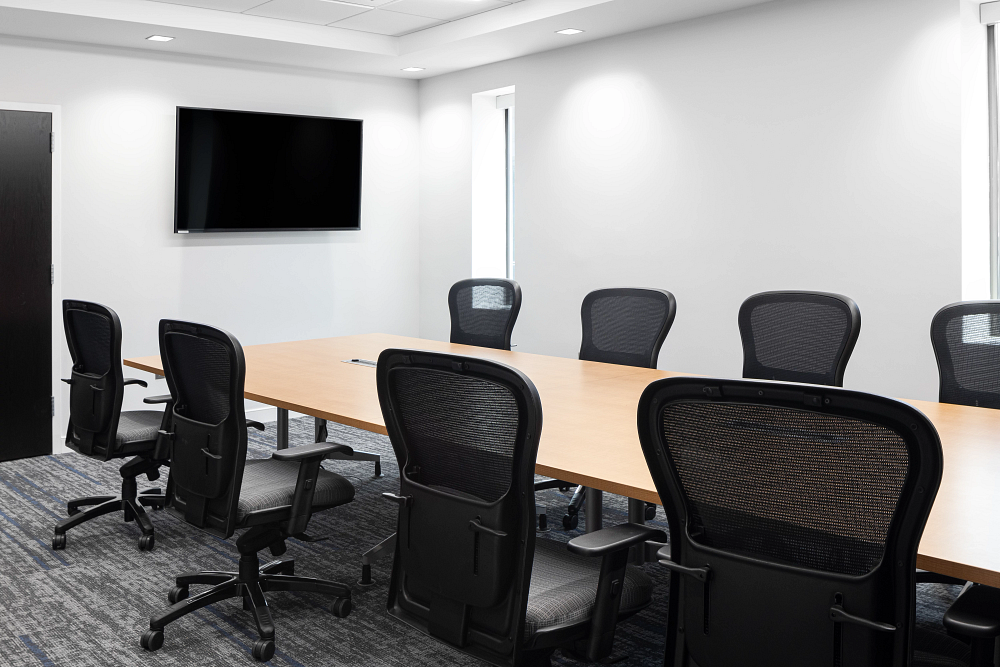 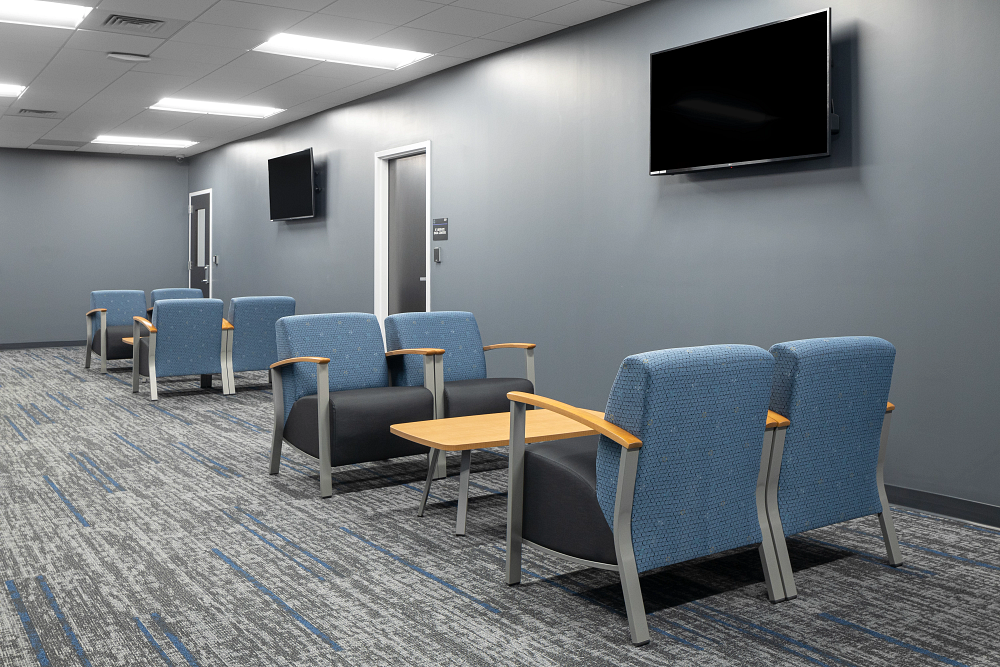 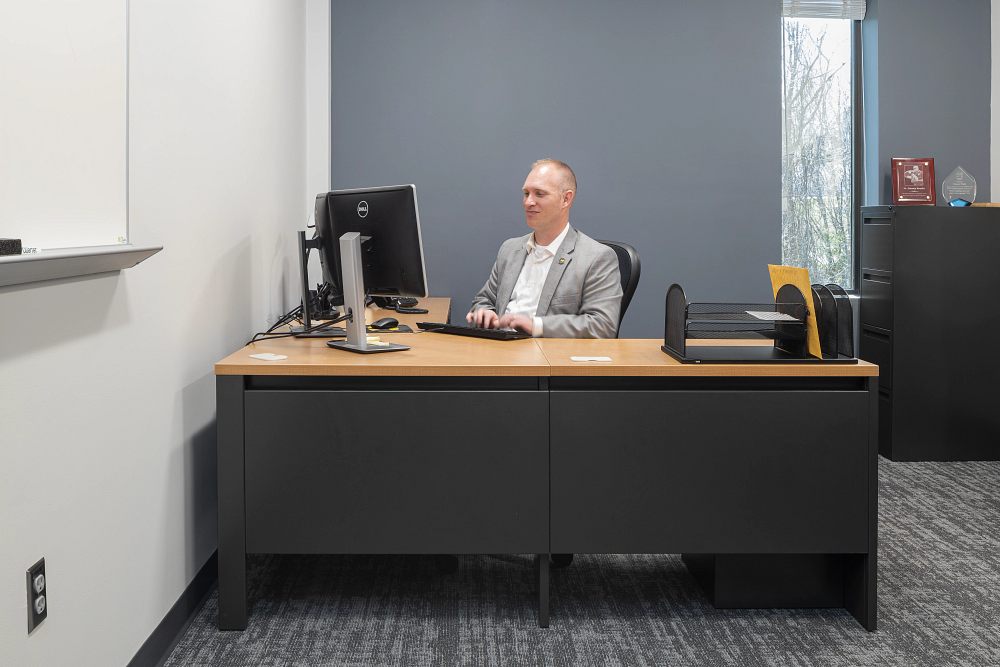 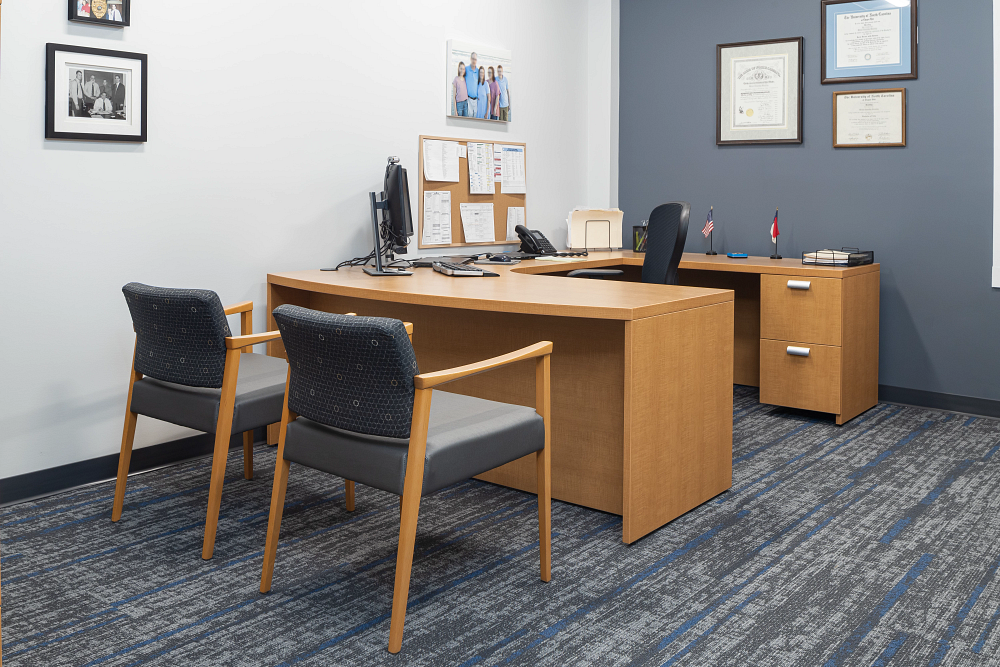