How to Make Open Offices Work for Everyone 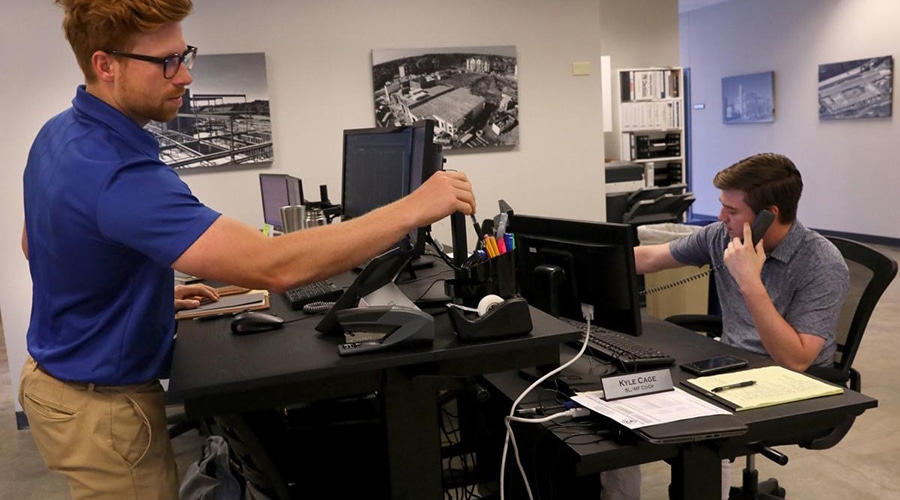 Nolan Gromacki (left) and Kyle Cage, mechanical engineering interns at Arco Construction Company, work at the designated intern island on Thursday, May 31, 2018, in an open office at the company's Rock Hill location. Arco has been rated as one of the top workplaces in the St. Louis area in an annual employee survey. Photo by Christian Gooden, cgooden@post-dispatch.com

Whoever thought that walls and doors could go out of style? Apparently, that’s what has happened at offices nationwide. Seven in 10 American offices now have an open floor plan, rather than cubicles or private rooms.

The open office aims to boost creativity, productivity and collaboration by making it easy for employees to interact. But that hasn’t been the case for everybody. A study published this summer by researchers at Harvard Business School found that in-person interactions actually dropped more than 70 percent after workers moved from a cubicle to an open-plan workspace. Employee productivity also declined.

Open offices and isolating cube farms aren’t our only two choices. Borrowing the best from both design approaches can give workers what they’re really after — control and ownership of their workspace. When people decide for themselves where and how they work, they’re happier and more productive. That pays dividends for employees and employers alike.

The mystique surrounding open offices is due in part to their popularity in Silicon Valley. But tech companies are not alone in trading walls for side-by-side work. Citigroup recently converted its headquarters to an open floor plan. Former New York mayor Michael Bloomberg preferred a wall-less “bullpen” setup during his tenure in City Hall.

Evangelists for open-plan workspaces often cite the serendipitous interactions they encourage. As Citigroup CEO Michael Corbat told the Wall Street Journal, “You’re going to be forced to bump into people. ... I want people interacting around our business and ideas.”

But all that mingling doesn’t help everyone. A 2011 analysis of over 100 studies found that open-plan offices can elevate workers’ stress levels, undermine motivation, and make it harder to concentrate. In Denmark, researchers surveyed over 2,400 office workers and found that people who work in open-plan offices took far more sick days than those in private or small-group offices.

To some, open offices can be stressful, noisy and distracting. It’s no wonder people don’t thrive in them when that’s the case.

It’s far better for employers to empower their workers to choose how and where they work. Someone might start their morning in a private work booth to finish a project on a tight deadline — and then move to a lounge in the afternoon to brainstorm with colleagues or recharge for a moment.

Some businesses are already embracing this flexible approach. Last summer, financial services firm Northwestern Mutual opened its new Milwaukee headquarters. Before designing the interior of the 32-story glass office tower, the company surveyed its employees on how they wanted workspaces to look, feel and function.

People wanted workspaces they could control. That led to workstations where employees can sit or stand. They can raise privacy screens to shut out distractions. And they can quickly reconfigure their workspaces with mobile tables, stools and whiteboards for impromptu meetings or brainstorming sessions.

Other companies are giving employees more freedom by scrapping seat assignments altogether. At Unilever’s New Jersey offices, 1,500 workers choose from 1,200 desks — as well as other spots at couches, tables and countertops.

Research backs up this sort of flexible approach. A University of Exeter study found that empowering employees to control the design of their workspace increases productivity by as much as 32 percent.

When people can take ownership over how they work, they care more about that work. Employees who can move to a variety of workspaces are 1.3 times more likely to be engaged than other employees.

Nobody wants to work in complete isolation — or utter chaos. Fortunately, they don’t have to choose between the two. Employers looking to maximize happiness and productivity must give workers control over their space. Research shows that they know full well what to do with it.