Bringing College to the Workplace 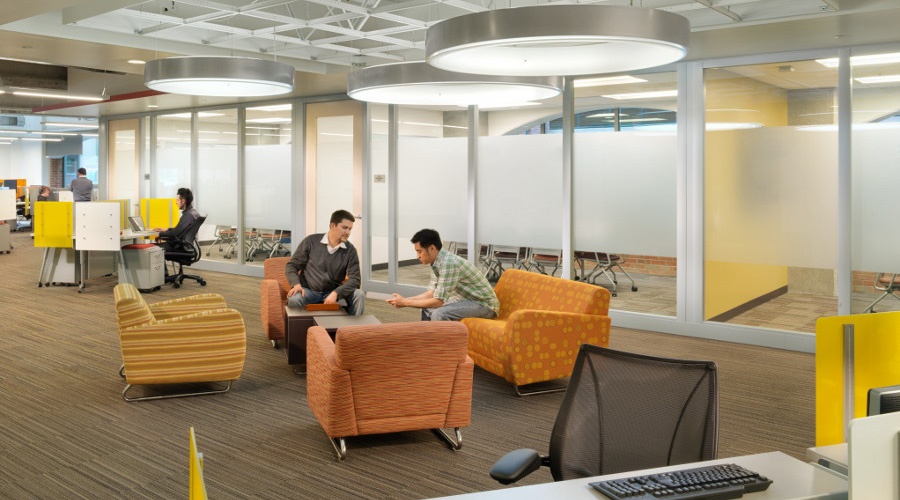 The job market is finally looking up for college students. This year, employers expect to hire 11 percent more new college graduates than in 2015. More than four in ten employers described the job market as "very good" or better for this crop of graduates. Yet most employers struggle to integrate young hires into the workplace. The difference between the working environment of a college student and an entry-level employee is enormous. This disconnect can be costly. Unhappy workers tend to be unproductive and are more likely to leave. That forces companies to spend more on recruiting -- and harms their reputations.

Employers can meet the needs of these young workers by going "back to school" -- and incorporating design elements and collegiate furnishings from campuses into their work environments. Doing so will help them attract young talent and, by boosting worker productivity, enhance the company bottom line.

Young workers have spent their formative years in dynamic learning environments. Predictably, the shift to the static life of cubicles and conference rooms can be difficult. Indeed, a recent survey conducted by consulting firm HOK and KI found that over 80 percent of newly hired college graduates feel "lost in transition" at their new companies. Three out of four businesses surveyed conceded that they could learn something from the design of colleges. More than one-third understand that their new hires will carry their old collegiate work styles into the office. Yet just 8 percent thought about including elements from college campuses when selecting furniture solutions for the workplace. That has to change.

Employers can start by scrapping the requirement that workers be in one place all day on a preset schedule. As one recent graduate told researchers, "Professors give me assignments and deadlines. How I complete those tasks is entirely up to me. They don't say, 'You will write this paper between 9 a.m. and 5 p.m. while sitting at this assigned library table.'" Technology has rendered the traditional workplace obsolete. Workers can be thousands of miles away and still collaborate. In fact, one-third of workers in knowledge jobs are already working remotely.

Employers should be empowering their employees with flexible work arrangements. They'll be rewarded for doing so. Thirty percent of workers with such arrangements report being very engaged at work; 60 percent say they're satisfied. By contrast, just 10 percent of those without flexible workplaces are engaged on the job. Twenty-two percent are satisfied at work. Likewise, employers should cultivate the free-flowing social environment of college campuses. Students and even faculty have limited individual space so that the bulk of campus space is shared by everyone. Young graduates don't want to be siloed in distant offices. Offices should prioritize open workspaces that encourage spontaneous collaboration.

Consider the case of Pixar, the computer-animated film studio. In 2000, the company took its computer scientists, animators, and executives from three separate buildings and merged them into one vast shared space. Pixar's chief creative officer said that he'd "never seen a building that promoted collaboration and creativity as well as this one." It's no coincidence that the studio reeled off a string of hits after moving into its new space.

Cassidy Turley, a Minneapolis-based commercial real estate firm, halved the size of its offices by essentially eliminating cubicles and private offices. Workers can stand at their desks throughout the day. Meetings take place in the center of the open office; quiet rooms are available on the periphery. The firm freely admits that its younger employees pushed for these changes. And it believes that collegiate design elements and university furnishings like these will help it recruit -- and hold onto -- the best workers the millennial generation has to offer.

The office of yore is fading fast. The current generation of workers demands much more from their workplace. Young employees will take their talents to companies with workplaces that remind them of their college days -- and leave those wedded to the status quo behind.

For more information on collegiate design and it's impact on the corporate world, download KI's eBook, "Collegiate Design: The New Driver for Workplace Design".