Is co-working better than working from home in my fuzzy socks? I tried it and this is what happened. 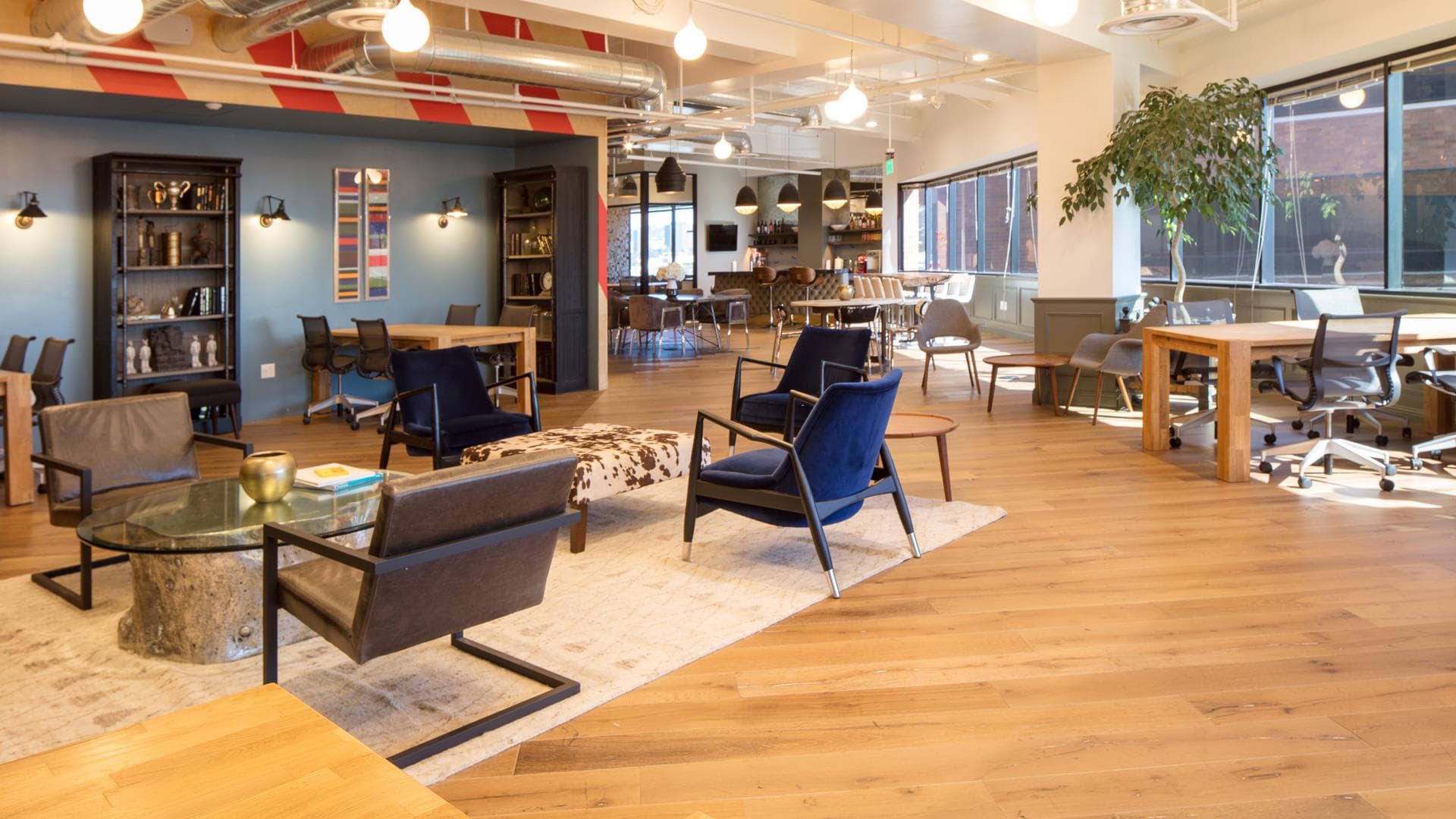 When I decided to go full-time freelance a couple years ago, I had a lot of self-doubts and fears to work through, but there was one thing I was consistently psyched about: working from home. Finally after years of praying for snow days and office-wide Internet outages, I no longer had to leave the borders of my apartment to get work done. Gone were the days of cranky commuting and overpriced salads from the cootie-ridden deli. Now I could work from the half-bedroom turned home office, have my dog on my lap and take power naps whenever I felt like it. I would be so much more productive!

Insert present day work from home reality: I'm currently sitting on the sofa in the living room. I still have a home office, but it's occupied at the moment by heaps of laundry, an elliptical machine, and a collapsed shoe rack. There are so many papers on my desk that I can't even deal, so I'm just avoiding it all for now. It has taken me 45 minutes to write what you have read thus far; not because I have writer's block, but because I keep getting distracted. First it was to go get milk, then to make a late breakfast. While I ate, I watched some really cute video of a baby fruit bat eating grapes, which got me wondering about fruit bats: Where do they live? Can they be pets? I did some totally useless research on fruit bats. By the time I came back to the browser of this story, I wondered if it wasn't too soon to take my daily 20-minute power nap.

I'm not always so prone to procrastination, but this sidetracked behavior isn't out of the blue, either. I've been wondering how I can stay more focused and boost my productivity, and so I decided to finally heed the advice of so many fellow freelancers and self-employed folks: I signed up for a trial at a co-working space.

The trial was only for a couple of days, but the experience left a powerful impression. I've assembled a list of pros and cons and some commentary from a couple of workplace experts on why co-working spaces have become such a phenomenon - and how they can help.

Getting Dressed for the Day is Underrated

My work from home uniform is very specific: sweatpants, baggy t-shirt and fuzzy socks. Getting dressed for the co-working space required a bit of planning and coordinating and also the annoyance of putting on shoes that do not double as slippers. I'm tempted to classify this all as a con, but I must label it a pro, because it got me out of bed and motivated. It also inspired me to shower right when I got up rather than waiting until noon.

And I really can't overstate how good it felt to have somewhere to go that was unequivocally tied to my work and goals for the day. It felt much different than heading into the office way back when, perhaps because it was entirely my decision to go. No boss was breathing down my neck. No one would be watching the clock if I was running a few minutes late. Additionally, it was wonderful to feel that my work warranted a professional setting, that it mattered so much to me and potentially, perhaps, to others.

According to Google Maps the space was only a 10-minute drive from my house, but this is Los Angeles, and despite waiting until after rush hour to leave, I still had to deal with mood-souring traffic. Also I had to circle the block a few times to find a parking space. This was a definite con.

Everybody is Focusing on Work

After my tour of the space, I picked a spot to buckle down. At first I felt the same roaming restlessness I tend to feel in a Starbucks. I had the urge to glance around and zone out. But I quickly sensed that people-watching wasn't going to fly, and there wasn't much to gape at, anyway. Everyone was completely engrossed in their own projects. I opened my laptop and dove into an assignment, compelled by the productivity of others.

Nancy Halpern, a leadership consultant and principal at KHN Associates speaks to this “buzz,” describing it as “the combination of energy, drive, ambition and excitement,” and adds that “tapping into it will lift you up when you're down, and help push you to keep moving forward. It's contagious and infectious.” I can vouch for that: I wrote and researched for three hours without so much as getting up to refill my water.

Time is Money when You're Co-Working

About four hours in, my back started cramping and I felt a bit bored. I wanted to go lie on my sofa and play Words With Friends. There was a sofa there, but it clearly wasn't for splaying out on, and even though I still could have taken a play break with my iPad, it just didn't feel right. The trial may have been free, but I could be paying good money to be here. I wanted to be earning that money rather than wasting time.

I did take a short break from my assignment, but not to lollygag on social media. I used it to do some emails I'd been putting off and a couple other tasks I'd been meaning to get around to but just couldn't be bothered with earlier in the week. Reconsidering even those little distractions was a definite pro as it adjusted my attitude and enabled me to get things done that had been weighing on my mind.

It's a Shared Space - in Every Way

I love my bathroom. I didn't realize how much I loved it until I was forced to use the bathroom in the co-working space. It's not that it was unclean or non-functional; it's just that it was a public restroom, so there was just a general icky vibe and often a line to get in. Also, while I could be pretty confident nobody was going to steal my stuff, I couldn't be 100 percent certain, so whenever I had to go I'd have to dismantle my whole laptop setup and lug everything with me.

One Perk of Co-Working? Appetite Control

I'm now writing from my bed where I just ate a mini-bag of Doritos. I don't know why I did this. It just happened. I'm telling myself I won't eat any more unhealthy snacks today, and definitely not eat the kind that will get crumbs in the sheets, but there's a strong chance I'll be back in the kitchen in a couple hours rummaging for more quick, carby fixes. It's a disgusting habit that I absolutely could not indulge at the co-working space. There were some free snacks available, but one granola bar was enough to sate me until lunch. And that's when I did something really unheard of: I took a full, one-hour lunch break that did not involve my laptop whatsoever. I went to a local café and enjoyed the time away from work. Even though I had to shell out money for a nice lunch rather than whipping up a sandwich, eliminating the mindless eating was well worth it. (Though should I make co-working a regular thing, I'll definitely pack a lunch).

As a reporter, I often spend several hours a day interviewing sources on the phone. It's a part of my job I've grown to love, as I'm generally quite extroverted and love asking questions and learning from others. But sometimes I forget how valuable it is to have real-life, in-person conversations, even if it's just small talk with fellow workers. At the co-working space, most everyone smiled and said hello. A couple of times when waiting on the Keurig line, I had more drawn out chitchat. Unlike in a “real” office, there was no complaining, no sense of power dynamics and no preconceived notions. It made me realize that these little moments of positive social interaction are important - and apparently, I'm not alone in feeling deprived of them.

Unlike in a real office, there was no complaining, no sense of power dynamics and no preconceived notions.

Gretchen Spreitzer, a professor of business administration at the University of Michigan's Ross School of Business, and faculty director of the center for positive organizations, notes that even people in traditional workplaces have opted for a co-working spaces if given the option because they didn't “feel socially connected, had no friends, or just didn't like the corporate environment.”

I also can now see how co-working spaces can be vital networking hubs.

“[Co-working spaces] get remote workers out of their homes and give them the opportunity to interact with others,” says Jonathan Webb, VP of business markets with KI. “People share ideas and collaborate with professionals across disciplines and across generations.”

I mentioned that I have to talk on the phone a lot for work, and that was definitely a challenge here. In fact, I only managed to nab some privacy for two phone interviews, and even then I kept worrying that I was going over my allotted time, or being too loud. This is a con that would be quite tricky to negotiate were I to join a co-working space. I'd likely have to sign up for added conference room or private office benefits, which would tack on a crazy added fee.

At around seven in the evening, I contemplated whether I should stay working for a few more hours. If I were at home, I wouldn't have even bothered checking in with myself, I just would have just kept going. But the others who had been there all day were starting to trickle out as the night owls were trooping in. I considered what more I could get done and realized that none of it was urgent, and that I would probably be better equipped mentally to focus on it the next morning. For the first time in as long as I can remember, I shut my laptop for the rest of the night and didn't look back.

In my experience the pros of the co-working space heavily outweigh the cons, and finally I understand why people dish out so much money for these spaces - and really they are not cheap. Kay Sargent, director of WorkPlace at HOK, notes that the average cost of a desk in a co-working space is the U.S is about $387 a month, but varies depending on services and city (yup, it's pricier here in L.A). That used to sound like an absurd luxury to me, but now it also sounds like a wise investment.

Though it's not a cost I am comfortable taking on right now, I hope I can in the near future. My trial run was a much needed wake-up call, proving thatI've developed some bad habits in blurring the lines between work and home (not to mention the Doritos). It's important to keep the two separate, not just for my career, but also for my sanity.

Now on to tidy up the office!