With the current political, ecological and social shifts in culture, the ways in which designers operate within communities is changing. Now more than ever, designers are becoming activists through their work, making an effort to preserve the history, heritage and legacy of the communities and neighborhoods they are designing for and within. 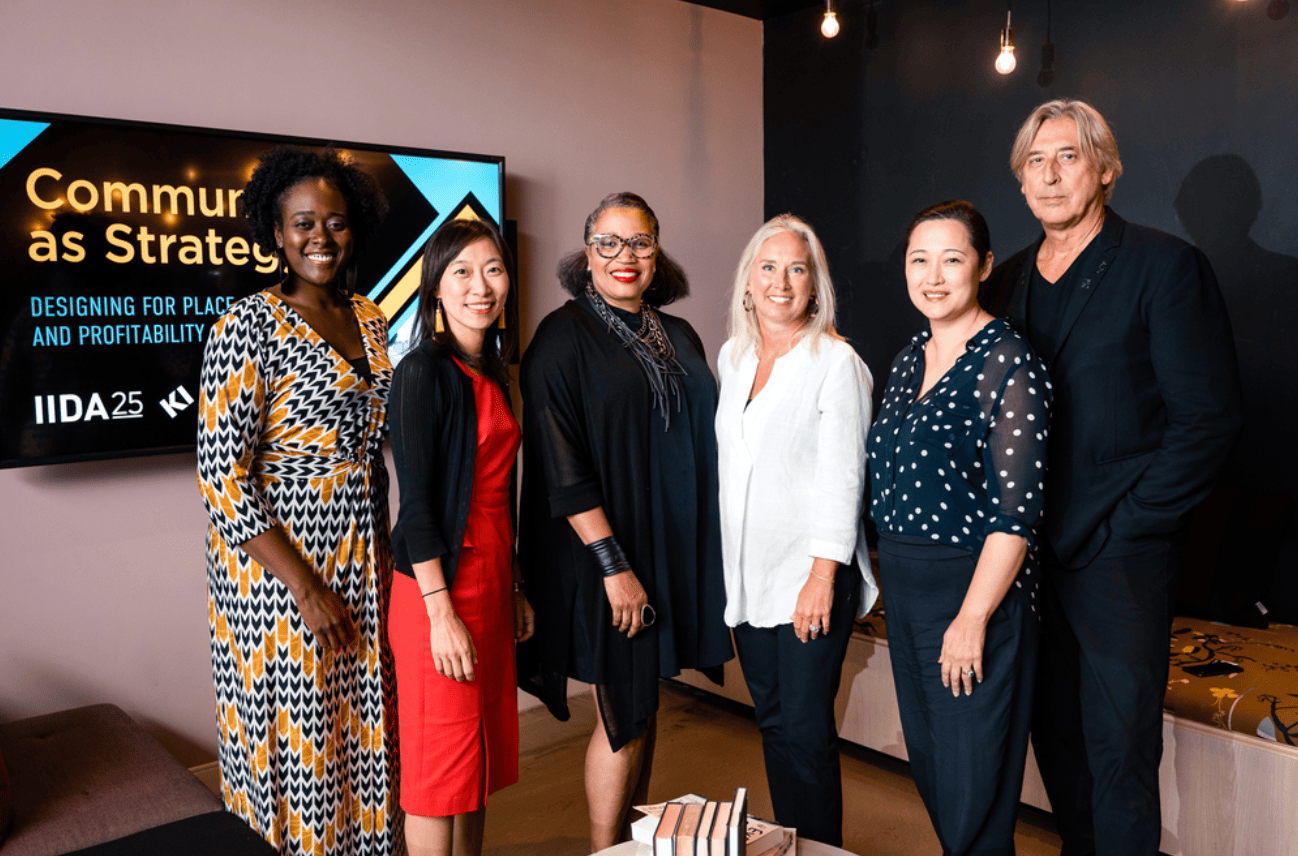 It has become understood that design is no longer apolitical and that designers are frequently able to play a key role in strengthening communities and engaging their members in more meaningful and dignified ways.

The inaugural Community as Strategy: Designing for Place, Purpose and Profitability event series, presented by KI and IIDA, focused on concepts of the “designer as activist,” addressing the way designers interact with and represent the various communities impacted by the work they do. The events, which took place in six U.S. cities throughout 2019, featured IIDA executive vice president and CEO Cheryl S. Durst, Hon. FIIDA, as the moderator, along with panels of multidisciplinary and diverse industry experts, designers and clients.

“Community as Strategy,” the key idea of the series, means aligning interior design and architecture practices with community-oriented goals and working within a community framework. The concept overall advocates for strong workplaces, healthier public spaces and enduring neighborhoods. “Design is not a real-estate event. It is a human event,” says Durst.

Designers have been utilizing the concept of community as strategy for some time, but in these complicated times, engaging with and empowering communities within your design practice is more crucial than ever. Community engagement from a designer’s point of view can often look like:

Designers have unique vantage points from which to gauge where a community requires help. Community-oriented designers can provide services to stakeholders in order to help them assess what their community truly needs. F. Phillip Barash, a fellow at the Boston Foundation and creative director at Sasaki, believes that “having the right words give you power,” and designers are able to give community leaders those words as well as glean language and understanding from community members.

That’s exactly what the Boston Foundation does with the Place Leadership Network, a diverse network of “place leaders” who aim to preserve and activate public spaces around Boston by working with local communities.

In the summer of 2019, the program began working with eight community organizations, including the Asian Community Development Corporation, Bowdoin Geneva Main Streets and the Charles River Conservancy to strengthen the culture of Boston’s various neighborhoods and reclaim, redesign and activate underutilized public space. “The program explores different assets of public space with a lens of equity and justice,” says Barash.

Designers also have the power to uplift underserved communities through design education. For Jon Otis, IIDA, founder and principal of Object Agency (OlA) and tenured professor at Pratt Institute, it’s critical that designers understand their unique positions to change the world around them.

In Brooklyn, Otis worked with the St. Nick’s Alliance, a non-profit community development organization, on the Brooklyn Story Voyager, a book bus bringing underserved communities in Brooklyn the gift of reading. “The goal was to increase exposure to reading for children in those at-risk neighborhoods,” says Otis. “The bus goes to schools, playgrounds and reading clubs.” St. Nicks collaborated with Otis’ interior design class at Pratt to create the design of the bus, allowing graduate design students to lead the way and engage directly with this critical aspect of community building.

Otis’ firm also took over working on the brand identity and promotion for the bus and its outreach initiatives. Otis described that during the discovery process, the client made a collage of what they wanted for the bus and what they thought was important for their culture and ultimately, for the people in their community; this deepened the understanding that designers have the power to engage with communities at various levels, particularly with public projects. Since design isn’t static, designers are able to understand the ever-changing needs of communities and how to best address them as they evolve.

Allowing Design to Become a Part of the Community

When the firm HDR began work on reimagining the campuses of Kaiser Permanente through the healthcare company’s Project RAD (Re-imagining Ambulatory Design) initiative, they aimed to engage communities across the board, from staff to patients to the general public. HDR’s first output driven by RAD was the Manhattan Beach Clinic, which emphasized patient-centered, collaborative care and was developed as a local, accessible resource for healthy living and education.

“Instead of thinking of Kaiser as just a healthcare provider, we thought of the campuses as important parts of their communities,” says Amy Mays, IIDA, interior design practice leader at HDR. Through research, crowdsourcing and ideation sessions, HDR conceived accessible, patient-centric environments and new ways of thinking about healthcare space.

The decisions designers make—whether they are civic, aesthetic or educational —can positively affect the surrounding communities for years to come. The more designers engage, empower and listen to the communities that are directly and indirectly affected by our work, the more we are able to create a lasting and beneficial impact.