When Will K-12 Classrooms Scrap Those Age-Old, Rigid Desk-Chairs? 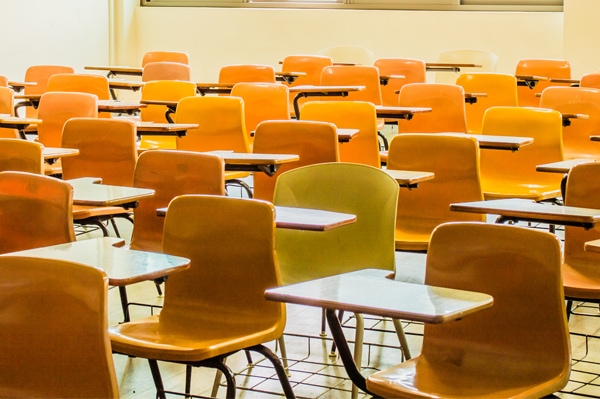 They’re still a mainstay in K-12, but there are rumblings that they’re on their way out. And good riddance, say some school leaders, educational furniture providers, and industry observers.

“Those ‘old school’ combo desks don’t offer that flexibility,” said Kyle Boudreau, the educational product marketing manager for KI, a Green Bay, Wis.-based company that is discontinuing that model of desks, which it called Intellect Wave. Sales of that style combo desk have been down. School customers want furniture that promotes student engagement and peer-to-peer connections, he said.

“In our school, we have lots and lots of desks,” says Robert Dillon, the director of innovation learning for the 2,800-student School District of University City in St. Louis, Mo., “and we have classrooms moving to some variety. Some have standing desks, some traditional chairs and tables. We’ve broken the momentum that 25 of anything is the right answer.”

Across the U.S., what’s getting in the way of wider adoption of flexible furniture in K-12 is “inertia, momentum, and tradition, which lead a lot of decisions around furniture purchases,” said Dillon, who has written and co-authored books about learning spaces, the most recent The Space: A Guide for Educators.

In school redesign, selecting furniture that fits the learning environment is considered a “key system element,” said Sujata Bhatt, a senior fellow at Transcend Education, a national nonprofit dedicated to accelerating innovation in the core design of “school.”

Transcend Education uses a slide deck showing classrooms in the late 19th century, 1950 and today as part of its presentations to help educators re-imagine school. The visual is a powerful message about “what’s changed, and what hasn’t,” she said.

Kevin Stoller, CEO of Kay-Twelve, a Phoenix, Ariz.-based national company that provides furniture to schools, gets the same message across on LinkedIn with images he’s grabbed from movies and TV shows across the years, from “Ferris Bueller’s Day Off” to “Superbad,” from “The Simpsons” to “The Goldbergs.”

“Most of the RFPs and projects we’ve been working on—for the past 12 months in particular—it’s very rare that it specifies one type of desk or type of chair,” he said.

More evidence that schools are beginning to broaden their furniture horizons is coming from the marketplace.

Bhatt, who previously was managing partner for innovation at the 56,000-student Boston Public Schools from 2016 to 2018, said the district has been investing $10 million in classroom redesign that includes different furniture choices and configurations from traditional desk/chair combos.

“The trend is really away from classrooms that put students in stationary desks in rows,” said Jim McGarry, president and CEO of the Education Market Association, which sponsors an annual EDspaces conference about educational facilities.

Researchers reviewing 25 studies concluded that a better fit for a student’s seat and desk resulted in “an improvement in posture,” as well as reduced discomfort or pain.

Getting a better fit included using adjustable furniture, sit/stand furniture and tilt tables and seats.  Researchers cautioned that students need to be taught how to raise and lower furniture to fit their bodies. The findings were published in the journal Ergonomics in March 2016.

“What should students be sitting in—or what should the learning environment look like?” asked Tim Springer, who was professor and chairperson of the Department of Human Environment and Design at Michigan State University where he developed and led the graduate program in Facilities Design and Management. “I don’t know that there’s a good prescriptive answer. I do believe it should be different from most classrooms we see.”

Springer said he once conducted a study in a private California middle school where 7th and 8th graders were given a variety of tables, chairs and work surfaces to configure as needed for each class, returning them to their original “nested” position at the end of the period.

“The teachers ended up saying, ‘If we can relinquish a little bit of control, we see the benefit in autonomy and focus and learning, collaboration and engagement,'” Springer, who is now semi-retired, said in a phone interview.

The challenge was that the researchers tried to replicate the approach in an elementary school on the south side of Chicago where students were younger—4th graders—and from socioeconomically challenged backgrounds. When the furniture was delivered, the facilities personnel at the school objected, asking “How are we supposed to lock this down?” Springer told them, “You don’t. You let the students arrange it.” Even a willing, creative teacher in that classroom found it difficult to relinquish control and make the most of that adjustable furniture, he said.

The Future in K-12 Furniture

The infusion of technology in K-12 classrooms is one impetus behind experimentation with different learning environments.

“Once schools went to more of a 1-to-1 [students to device] environment, it eliminated the need for a big desk with storage for books,” said Stoller. “That prompted the change to do more with collaboration…and it blew up the floor plan.”

How long will it be before K-12 schools get rid of the rows of desks that put teachers at the front of the room in what is often called the “sage on the stage” teaching scenario?

They won’t disappear overnight, everyone interviewed for this article agrees.

“We’re talking about intentional design and syncing instructional practices with technology, tools, and physical space,” said Dillon. “We have lots and lots of teachers who say, ‘I get this,’ but it doesn’t feel like a building-wide change.”

Another issue is whether a school’s or district’s budget can support a purchase. New classroom furniture often comes after approved bond measures help build new schools or renovate older ones. But when money is tight, a perceived need for new furniture configurations is one of a long line of demands.

Finally, there’s the question of whether educators are invited into the decision-making process, and asked for their feedback about how furniture in their classrooms fits with their pedagogical plans for a space.

“For the next 10 years, I think we’ll see maintenance directors and operations people making decisions via inertia, momentum, and tradition,” Dillon predicted. That’s what happens in districts where “students, teachers and curriculum leaders aren’t at the center of these decisions.”

McGarry at the Education Market Association concurred that change could be slow. “It can be a cultural thing, and in many cases, it has to come from the top. If a school isn’t embracing one-to-one learning or project-based learning, the facility’s not going to change.”

Let’s see when Hollywood picks up on the change, and broadcasts it to audiences far and wide.