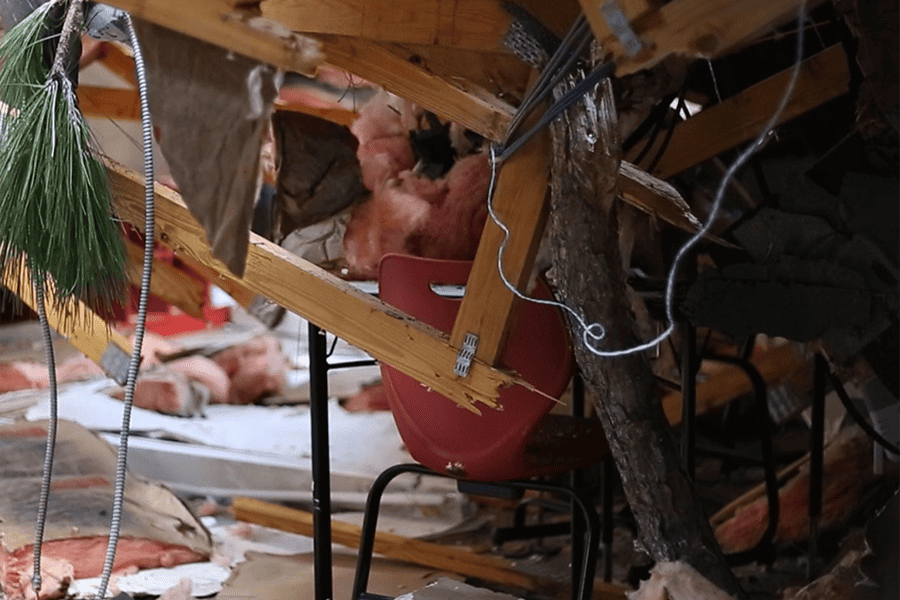 How much does a tree, a roof and the force of a hurricane weigh? There might be an exact answer for that somewhere, but it’s definitely not enough to destroy a desk made by KI.

In October, Hurricane Michael, the strongest storm on record to hit the Florida Panhandle, mostly destroyed the Robert F. Munroe Day School in the Panhandle city of Quincy. Amid all of the destruction were dozens of unscathed KI Intellect Wave desks. One was even holding up a tree and at the classroom roof that crashed on to it.

“I don’t think that we thought, at first, that it was actually the desk,” said Adam Gaffey, principal of the school. “But once we started pulling the desk out, the tree began falling. This was a very large tree. It destroyed the entire building. The roof didn’t stop it. The walls didn’t stop it. The bookshelf that was smashed into bits didn’t stop it. The only thing to stop it was the desk. Not only that, but most of the desktops in the destroyed building didn’t even have damage. No scratches. A few little dings here and there. They survived so well.”

Recently, after experiencing some significant growth at the school, Gaffey and his staff purchased new classroom furniture.

“Rather than going out and buying more of what we already had, I began exploring what we could spend our money on, something that would allow us to improve the experience in the classroom,” Gaffey said.

Gaffey and his staff really wanted the students to have adjustable desks so fidgety kids could stand up, move their feet, walk around and not be tied to a chair. They also wanted to bring the kids’ eye levels up so they didn’t feel like they were being talked down to all the time and to see the teacher and the board better. They chose whiteboard tops on the desks because kids loved the idea of being able to write right on their desk. They also selected a non-traditional triangle shape, which promoted group work and flexible designs in the classrooms.

Gaffey was planning on purchasing more KI furniture for other areas of the school, including the library and the science room. “What the desks did was give the kids a much better experience,” Gaffey said. “In the math classroom, for instance, the teacher saw much more enthusiasm for the subject. The kids were opening up more and talking with the teacher. They loved to work their math problems right on the desk — something they never got to do before. The teacher could come by and erase something and make corrections. The kids were eager to help one another. We saw a big increase in collaboration in the classroom. Students who in the past didn’t find the subject enjoyable when they were isolated at their desk are more productive, less day-dreamy.”

Gaffey was planning on purchasing more KI furniture for other areas of the school, including the library and the science room.

Then, Michael the hurricane reared its ugly head.

“Our teachers did most of the work setting up the classrooms,” Gaffey said. “Some had been in the same room for years and years. It was very hard for the teachers — emotionally — that lost their classrooms. You wouldn’t know it. They didn’t wear it on their sleeves. They were there three days after the storm, getting right back to work setting up their new rooms. But, it was hard.”

The school is now set up temporarily in local churches, and the kids were surprised to see their desks. They had such destruction at home, too, that Gaffey and his staff tried to provide a sense of normalcy right away. The desks are what the stu-dents feel are most theirs.

“I must have explored more than two-dozen furniture companies,” Gaffey said.

He listed KI’s quality furniture, the variety of designs, colors and styles and KI’s superb customer service as reasons he chose the company.

“Withstanding hurricanes was not a factor,” he said. “It should have been part of our conversation, but it wasn’t something we directly considered or thought about at the time. But really, when there’s a tornado or an earthquake, where’s the first place the kids go? Under the desk.” 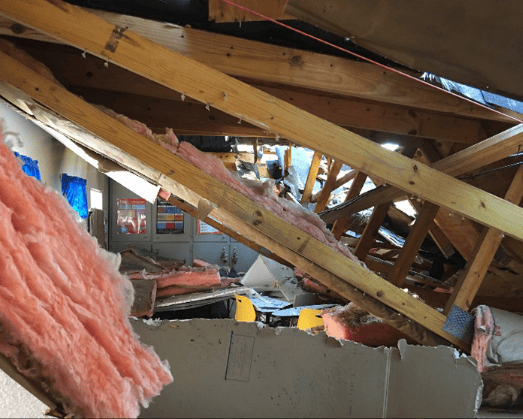 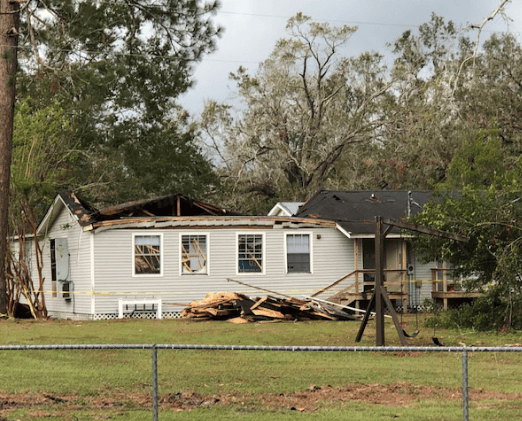 Bryan Ballegeer, KI’s vice president of education, was surprised but not shocked by the fact the desks had survived the storm.

“I had a bit of a wow ... that’s cool — as much as something can be cool in a disaster, obviously. It mainly reaffirmed why I stand by our products. It was a bit of a shock though ... that nothing else held up to the force.”

Ballegeer notes every KI piece of furniture has to go through some sort of testing in accordance with the ANSI/BIFMA e3 furniture sustainability standard.

“So, for the Wave, there might be 13 different tests that you can, or should, run on it,” he said. “Some other companies might only pass one or two of those tests, then claim they are ANSI/BIFMA approved. At KI, when we put out a new product, we make sure it hits all of the tests before we release it, so it can stand the test of time, or what a student might do with it or to it, and in this case, what something natural might do to our furniture. If it’s holding up an entire roof, it shows that we go above and beyond to make sure our products are top notch.”

No regulations exist for school furniture like they do on baby car seats after car accidents (they must be replaced, even if they appear undamaged). But, between the school facilities team and KI’s local representatives examining the desks, they have been deemed safe and approved for continued use.

“It was a local-level judgment call, yes, but one that the school didn’t have to make alone,” Ballegeer said. “Our team of engineers advised on what to look for like leg stability, cracks in the pieces, where the pressure points are, the crucial structural joints, certain screw elements, etcetera. They know what to examine, even if it seems good on first look.”

The ones that did need replacing — less than five — KI did with pleasure, even though a natural disaster like this doesn’t fall under the warranty.

“We told them, you’re going through enough having just lost the majority of your school, we can replace a few chairs and desks for you,” Ballegeer said.

Will KI, the company known for debuting the folding chair in 1941, start designing school furniture with specialized safety features?

“I’m intrigued by that,” Ballegeer said. “We haven’t gone down that path yet. I’m hesitant to say we’ve got stormproof furniture. As much as I stand by the quality, I’m sure the testing would be much different from the standards we already exceed. We’ve had other discussions along this line, like what elements might we improve to be safety features in terms of other disaster incidents in schools, like furniture that is bulletproof or shatterproof. It’s definitely something we’re going to look into.”