How a company sets up its office space can influence otherwise sedentary employees to get up and go, says Jonathan Webb of KI Furniture.

Several years ago, Jonathan Webb was thinking about how “active design” could improve the workplace. He meant it as a way to describe restructuring a workspace to promote the people inside to adopt healthier habits.

A nonprofit called the Center for Active Design already uses the term to describe utilizing architecture and urban planning to improve public health. Its website argues that in the 1800s, overcrowded cities with poor public health systems led to a high mortality rate from infectious diseases. Then in the late 19th century and early 20th century, many cities used design strategically and changed their infrastructure, which helped lead to a drastic reduction in deaths by infectious diseases.

Speaking to Webb about his company and what he does, it was interesting to keep this in mind. I thought of the workplace as a micro-version of a large city, one in which shifting the physical environment can impact health - in this case employee health rather than public health.

Webb is the vice president of workplace strategies at Green Bay, Wisconsin-based furniture manufacturer KI. He also advises clients that work with KI on changes they'd like to see in their workspaces.

“So many employers and workers lead sedentary lifestyles and spend so many waking hours, up to 60 percent, in a sedentary state. Commuting, sitting in a car and then sitting at offices during the day,” said Webb. “We started to look at office behaviors and what employees are doing and what organizations aren't doing to push activity to foster inherent movement in the workplace.” 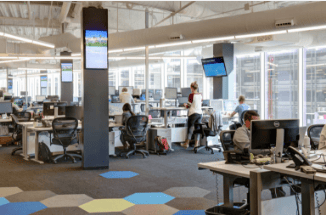 He recommends nine principals for implementing active design in a workspace, which includes subconsciously motivating people to take the stairs, offering healthy food options, making sunlight more accessible and seeing outdoor spaces as potential workspaces. A more open layout is something that could promote face-to-face communication and collaboration, he added.

The part about collaborative spaces was especially interesting to me because of a recent blog I read in The Washington Post. The writer argued that the open office trend had many flaws, including a lack of privacy and decreased productivity among employees who find the setup distracting. She also cited that she and her employees were more susceptible to getting sick.

The blog was from 2014, but it still contains criticisms of the open office environment that are legitimate today. Hearing Webb's explanation of how the changing office environment is beneficial was valuable. It served as kind of a counter-argument in the apparently controversial world of office design.

He defended both the open office space and the use of outdoor spaces in one example I thought was particularly intriguing. The crux of the argument was that businesses are looking for design cues outside of business industries. One place they're looking at are college campuses, in which students are productive in communal areas like libraries and cafeterias. They also make outdoor areas appealing for the use of students as an alternative. Students don't have cubicles, and they're always on the move because they have multiple places they can work.

Personally, I liked this idea because I was one of the students who hopped from the art history library to the Wisconsin Historical Society to the courtyard to the student radio station lobby in one evening to finish up my assignments at the University of Wisconsin.

Organizations are figuring out ways to purposely design their outdoor spaces with Wi-Fi and the appropriate amenities or architectural elements to make them a viable workspace, Webb said.

“Taking design cues is a wonderful workplace strategy for organizations trying to attract and retain younger talent,” he added. “Because where has this talent been the last four to six years?” College campuses, often.

Finally, he had a solid example with a New York-based client that implemented surface-level changes to make a difference. The client wanted to subconsciously push employees to take the stairs more. Of course, legally, office spaces have to have staircases for fire-escape purposes; that doesn't necessarily mean that the stairs are located where employees naturally gravitate. They might be more inclined to take an elevator just because it's more in their eyesight or something like that. 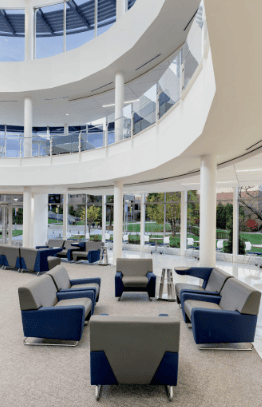 This client decided to entice employees to use the stairs rather than the elevators in a way that was in their means. Their office took about two or three floors of the building, and their staircase was in the back corner of the space. They made the general area more appealing by removing a set of heavy doors, repainting the hallways, adding some wall graphics and adding brighter lights. They included informational posters on nearby walls telling employees how many extra calories they'd burn by taking the stairs.

“They don't necessarily have to be really expensive strategies,” said Webb.

These principles are important, he said, because just offering a wellness program to promote health is oftentimes not enough. Many employees don't participate.

“The bottom line is that if you are a sedentary person by nature, you are bound to remain sedentary even if formal workplace wellness programs are being offered,” said Webb. “That's a big deal. Unless [a company does] things that inherently promote activity during the course of the day, a majority of people are not going to move.”